Chris was brought up with Min Pins, Miniature and Toy Poodles, Italian Greyhounds and Cairn Terriers and started showing dogs at the age of 9.   Her first real love was Borzois.

After a while she decided to try a new breed with Stella (her mum) and this started them off with the Japanese Chin, which as you can see has now culminated in a very successful kennel.

At a later date along came Japanese Akitas, more recently a Papillion has come to live with Chris.

Chris held her own affix under Samarra before joining her mum under the Alstella affix.

Chris is a very well respected championship show judge not just judging Japanese Chins but all toy breeds and many utility breeds.  Chris has had the honour or judging at Crufts in the past.

Chris is also a fully trained and qualified microchip implanter. 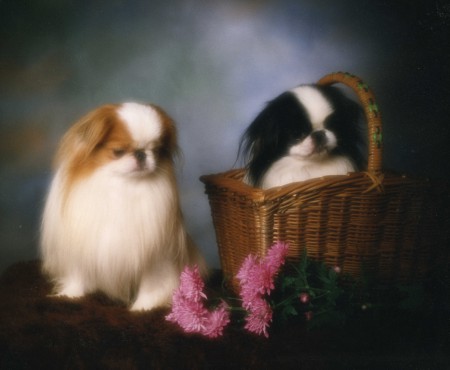 Sam was brought up with Japanese Chins and started  showing them at a very young age, and as the years went by  she also fell in love with Bulldogs.  A couple of litters of Bulldogs have been produced in the past and Sam now owns 2 Bulldogs, both of whom are pets and live a life of luxury by the fire.  This has not wavered her love for the Japanese Chin and can still be found around the Japanese Chin ring at shows.

A rescued Chinese Crested and a Boston Terrier have also been included in the family over time.

Webnode, an innovative sitebuilder
Have a captivating website for free!
Get started